Ancon works with all the hotels in Havana!

If you are not interested in any of the hotels described in this list, Ancon will provide a different option for you.

This magnificent hotel built in neoclassic style stands out in the tumultuous Prado promenade and Dragones street. The hotel is located in the historical center of Havana, in front of Central Park (ParqueCentral). Close to the hotel you will find the Great Theater of Havana, the Cuban Capitol, the museum of arts and the House Bacardi. This is the most famous hotel in Havana. Here a great number of important politicians and actors have stayed and also many Hollywood movies about mafia have been filmed within the walls of this hotel.

This hotel built during the 60s of the past century, boasts beautiful rooms with huge windows and a panoramic view of all Havana and the sea.

The hotel offers an excellent service and comfortable rooms. It was recently renovated and is very close to the center of the city and Five Avenue (Quinta Avenida)

The hotel is located in the region of Vedado, very close to the touristic attractions of Old Havana. Wide rooms. In the main restaurant there is a room for young people. In the hotel you will find the original club Habana Cafe and the House of Cigar. The hotel boasts a good location and is an ideal option for business meetings. This Hotel features history and modernity. This building is the former house of Don Sebastian de Peñalver. At the beginning of the 19th century the building was occupied by the successors of the Marquis San Felipe y Santiago

This modern and comfortable hotel is located in district of Miramar, very close to the embassies of numerous countries.

The hotel was founded in 1860. At those times it was located on Amistad Street, there was located one of the first telegraph lines of the world. In 1889 the hotel was moved to Neptuno and Prado streets, where is currently situated.

In the hotel's lobby there is an exhibition of approximately 400 art works. However, the building itself can be considered as a museum.

Inglaterra Hotel is one of the oldest in the city. This building is considered a national symbol and an inseparable part of the Cuban culture. Guests will have the opportunity of visiting the restaurant La Sevillana, decorated in a colonial style, and enjoy a delicious food.

This architectural monument located in the historical center of Havana boasts a triangular form, a magnificent neoclassical facade, a beautiful interior yard, a fountain of colonial times, sculptures and stained-glass windows.

Comfortable hotel located in the residential district of Miramar. It's very easy to get at the center of the city in a touristic bus. It is recommendable for active tourists.

This hotel is located very close to the Old Square and St. FrancisofAssisi square. Hotel rooms are decorated with famous Cuban paintings and are very comfortable.

Luxury hotel built in colonial style. It boasts a beautiful facade in Mudejar style, a comfortable yard, a panoramic restaurant in the top floor with a ceiling decorated with ornamental patterns.

This is one of the oldest hotels in Havana. It was built in the 20s of the past century. At the beginning of the 30s, Ernest Hemingway stayed in the room № 511, where are kept writer's belongings.

An excellent hotel highly recommendable for families and businessmen. Terral 4* is the newest hotel in Havana built in Malecon. In the hotel there are 14 rooms with sea view. It boasts a modern interior and excellent service. The hotel is located very close to the center of Havana. Comfortable rooms remind you the aristocratic style of life of the Cuban bourgeoisie of the 1920s. View of the fortress "El Morro" 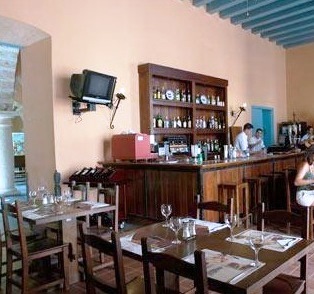 It is located close to the Arms Square and the Cathedral Square. Built in a colonial style the hotel represents the typical colonial aristocratic house of the beginning of 19th century. In the hotel there are 38 rooms, restaurant and snack bar, tennis court, terrace with view of Old Havana. During the 18th and 20th centuries the building was redecorated and boasts an original design. This beautiful hotel is a good option for those who love good food. It boasts an incomparable beauty and a very popular restaurant: "Cantabria". This hotel is one of the most popular in the capital. It is located very close to Obispo Street and The Arms' Square.

Comfortable hotel in the center of Havana. Guests are allowed to enjoy all the facilities of the hotel with the exception of gym.

This comfortable and reasonable-priced hotel is located very close to the center of Havana and Malecon. It is recommendable for young and active tourists.

At the great doors of the hotel Tejadillo you would find a spacious colonial yard. Innumerable paintings, portraying daily life in Havana, sculptures and ceramic pieces are a clear example of the luxury design of the hotel.

It is located only 10 minutes' walk from Old Havana, in the seafront Malecon, which is one of the most popular and visited streets in Havana.

Thehotelisashelter for those seeking some peace in the middle of the city, but at the same time is a clever choice for it is very close to the center of the city. Economic option. Small and comfortable hotel located in the first line of the beach and close to the colonial center of the city. The hotel offers a free transfer from Havana several times in a day. Economic option located in the center of the city. It is recommendable for active tourism and for young tourists. Economic and comfortable option for those who love getting in direct touch with nature and the tropical vegetation. These beaches are among the most popular places in Cuba for practicing windsurfing.